In honor of Post-traumatic Stress Disorder (PTSD) Awareness Month the Brain Blog has devoted the past several weeks to review the research of Dr. Pradhan and colleagues. Dr. Pradhan led the development of TIMBER Psychotherapy, a mindfulness-based approach to treating PTSD and other disorders. In our introduction to TIMBER psychotherapy, we reviewed the components of TIMBER. Last week we discussed the history and efficacy of TIMBER. In both articles, we referenced Dr. Pradhan and colleagues’ research combining TIMBER with pharmacological treatment. This week we will provide a more detailed assessment of the use of Ketamine infusions in conjunction with TIMBER. 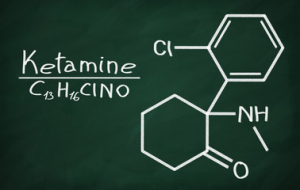 As this was the pilot design study, Pradhan and colleagues suggested further research with improved sample sizes and a participant group that only receives ketamine infusions without TIMBER psychotherapy sessions (Pradhan et al., 2017). Pradhan and colleagues also noted the potential of d-serine as a biomarker for treatment efficacy (Pradhan et al., 2017).

Basal d-serine has been found to serve as a marker for PTSD severity, ‘associated with acquisition and extinction of fear memory in animals and patients with PTSD’  (Pradhan, Mitrev,  Moaddell & Wainer, 2018). In a 2018 study, Dr. Pradhan and colleagues replicated their pilot study but additionally measured basal d-serine level “prior to the initiation of the infusion (basal) and at the end of the infusion (40-min)” (Pradhan et al., 2018).

TIMBER Psychotherapy For PTSD, Depression, and Traumatic Psychosis also references biomarkers as the future direction of TIMBER psychotherapy research, as well as increased research and development of The Arousal Response to Trauma Memory Reactivation (ART-MR©) Scale (Pradhan, Pinninti & Rathod, 2019). ART-MR scale “is a clinician-rated scale that measures the level of biobehavioral and cognitive-emotional arousal responses” and can be used to assess patient arousal without verbal cues (Pradhan, Pinninti & Rathod, 2019).

For further reading on the pharmaceutical use of ketamine, you can read about ketamine as an antidepressant or review this article’s citations from Dr. Pradhan and colleagues. For more about TIMBER or its predecessor Y-MBCT, you can view Dr. Pradhan’s lectures online (on TIMBER, on Y-MBCT). Lastly, HBSF’s patient advocacy team can be reached at patientadvocacy@brainsciences.org for additional resources regarding neurodegenerative diseases and other forms of mental illness.