The Power of the Brain

The human brain is an unparalleled organ, but we have only recently begun to learn its mysteries and function. The brain is the core of who we are as both a species and an individual. It is “the seat of intelligence, interpreter of the senses, initiator of bodily movement, and controller of behavior” (Hassan & Rizvi, 2019). Unlike other organs, it cannot be replaced nor simulated through medical treatment. We are each bound to and defined by our unique brains. In honor of this connection, our March topic is “The Power of the Brain.” 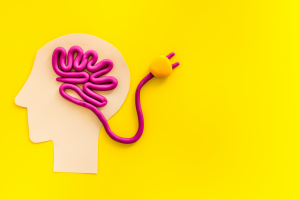 The brain is roughly three pounds of tissue, eighty percent of which is water (Hassan & Rizvi, 2019).The folds which give the brain its signature “folded” appearance are known as sulci (the depression) and gyri (the ridge) and create more surface area for increased cognitive ability (Bailey, 2019). Unfolded, the brain is roughly two and a half square feet of brain matter, yet folded it fits into the human cranium (Itoh, Poulopoulos,  & Macklis, 2017). The brain is also energy efficient. It operates on the same resources as a ten watt  light bulb, yet it can process approximately one hundred million MIPS (Million computers Instructions Per Second) (Hassan & Rizvi, 2019). This is the equivalent of a one hundred sixty eight thousand megahertz computer (Hassan & Rizvi, 2019). Overall, the brain uses twenty percent of the body’s water and caloric intake but puts it to incredibly efficient use.

Experts describe the brain as “a complex temporally and spatially multiscale structure that gives rise to elaborate molecular, cellular, and neuronal phenomena” (Bassett, & Gazzaniga, 2011). Neurons, or nerve cells, are the brain’s currency for information exchange using electrical impulses and chemical signals to transmit information. It is estimated that the human brain has over one hundred billion neurons and more than one hundred trillion synaptic connections (Herculano-Houzel, 2009; 2012). Individual neurons carry an electric signal, then convert this signal into a chemical one, releasing neurotransmitters into the synapse (National Institute of Health, 2007). Neurotransmitters are received by the dendrite, then sent down the neuron and to the synapse by the axon (National Institute of Health, 2007). Neurotransmitters have many different functions in the brain, including motor function, mood, digestion, sleep, and arousal (National Institute of Health, 2007). While there are over two hundred neurotransmitters estimated in the brain, example neurotransmitters include norepinephrine, serotonin, glutamate, ATP, histamine, dopamine, and GABA.

The brain is housed inside the cranium for protection. However, it also has the additional protection of the cerebrospinal fluid that surrounds it and being isolated from the bloodstream by the blood-brain barrier (Hassan & Rizvi, 2019). Cerebrospinal fluid cushions the brain from impact, and “[provides] a medium for the transfer of nutrients and waste products to and from the brain tissue” (Wright, Lai, & Sinclair, 2012). Additionally, submerging the brain in fluid changes the brain’s effective weight from 1500 grams to 50 grams, keeping the brain from crushing itself with its weight (Wright, Lai, & Sinclair, 2012). Meanwhile, the blood-brain barrier protects the brain from immunological and toxicological threats. Experts describe that “the blood vessels that vascularize the central nervous system (CNS) possess unique properties… which allow these vessels to tightly regulate the movement of ions, molecules, and cells between the blood and the brain” (Daneman & Prat, 2015).

Despite these protections, the brain is still susceptible to injury and disease. Traumatic Brain Injuries are one such example. Strokes occur when access to the blood supply is lost, whether due to a lack of flow or hemorrhaging. Degenerative disease and psychiatric disorders also affect the structure of the brain. Neurodegenerative diseases take different forms but are all driven by the deterioration and death of neural cells (National Institute of Environmental Health Sciences, 2019). Examples include Parkinson’s disease, Alzheimer’s disease, Huntington’s disease, Amyotrophic lateral sclerosis, and motor neuron disease. In the case of both neurodegenerative disease and psychiatric disorders, changes are both anatomical and functional.

At least twenty percent of the United States population has either a neurodegenerative disease or psychiatric disorder (Nager, 2016). This costs over one and half trillion dollars per year (Nager, 2016). In the United Kingdoms, the cost of forty five million persons having either a neurodegenerative disease or psychiatric disorder cost approximately a hundred thirty four billion euros per annum (Fineberg et al., 2013). Further research into the human brain, its function, and potential is necessary to reduce further costs, increase patient and caregiver quality of life, and prepare medical professionals.

Increasing brain awareness is key to reducing stigma around mental illness and brain injury as well as helping patients “advocate for their own health and to be well informed of new, proven treatment options” as is part of the HBSF mission. Despite recent advances, there are still many steps forward to take in our understanding of the brain. You can support HBSF’s  research on the brain and neurodegenerative disease by donating here.

Nager, A. (2016). A trillion-dollar opportunity: How brain research can drive health and prosperity. Information Technology and Innovation Foundation. https://itif.org/publications/2016/07/11/trillion-dollar-opportunity-how-brain-research-can-drive-health-and