As we come to a close on our month dedicated to TBI, we will be discussing novel measures of assessing emotion perception following a TBI, The Complex Audio Visual Emotion Assessment Task (CAVEAT), developed by Rosenberg, McDonald, Rosernberg, & Westbrook (2017). Rosenberg et al. (2017), explain the importance of their research as “the effects of TBI on psychosocial functioning have been shown to pose an even greater barrier to adjustment and rehabilitation than the effects on physical and cognitive functioning” (Rosenberg et al., 2017). While there are many factors that lead to reduced psychosocial functioning, Rosenberg et al. (2017) chose to focus on alexithymia. Alexithymia is the difficulty describing or recognizing emotions, which can ultimately lead to interpersonal difficulties, social isolation and depression (Schwartz, 2015). 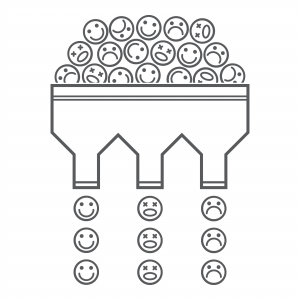 Participants were asked, first to choose whether the emotion displayed was positive or negative, then choose the emotion depicted from the list of 11 possible emotions. Results on this measure were compared between a group of participants with TBI and a group of participants without TBI or any other mental health illnesses. Two studies were conducted, the first study compared both the TBI and non-TBI group in terms of accuracy on both the CAVEAT and other emotional recognition tasks. While the second study, was to compare the CAVEAT results to results recognizing the six universal emotions (Rosenberg et al., 2017). Aside from the occurrence of a TBI, participants were chosen for a similarity in age, gender, education level, and occupation (Rosenberg et al., 2017). These two studies were proposed to find the significance between performance differences in TBI, and TBI participants and results correlate with other standard measures of emotional recognition (Rosenberg et al., 2017).

For the first half of the study, the other emotional recognition tasks were The Awareness of Social Inference Test (TASIT),The Emotion Evaluation Test (EET), The Reading the Minds in the Eyes Test (RMET), twenty-item Toronto Alexithymia Scale-I (TAS-20), and Balanced Emotional Empathy Scale (BEES). The TASIT and EET are two separate parts included in one test, that use video prompts to test participants on recognizing the six universal emotions (McDonald, Flanagan, Rollins, Kinch, 2003; Rosenberg et al., 2017). This is similar to the CAVEAT, except that the CAVEAT tests participants on twenty two emotions instead of the universal six (Rosenberg et al., 2017). Meanwhile, the RMET uses 36 still photographs of eye-regions and has participants choose one of four emotions (Rosenberg et. al, 2017). Like the CAVEAT, there is a wider range of emotions to choose from, though the selection process varies (Rosenberg et al., 2017). The BEES, varies from the previous two measures in that it is a self-reporting test. Participants rank themselves as agreeing or disagreeing with various statements that then serve as a score for how “responsive to the emotional expressions and [experiences] of others” the participant is (Rosenberg et al., 2017). Similarly, the TAS-20 is a self-reporting questionnaire assessing features of alexithymia (difficulty describing and identifying feelings) (Rosenberg et al., 2017; Bagby, Parker & Taylor, 1994).

If you or someone you know have experienced a TBI and need help, you can contact HBSF’s Patient Advocacy program at patientadvocacy@brainsciences.org or look into care, prognosis, and federal resources available for TBI here. You can read this month’s other posts on TBI here (our introduction), here (on professional risks of TBI), and here (on the treatment of neuroinflammation).

Though TBIs are a chronic condition, TBI awareness month happens every March, lead by the Brain Injury Association of America. More about de-stigmatizing TBI, empowering people with TBI and their caregivers, and promoting support systems can be found through their #ChangeYourMind on various social media.

Cherry, K. (2020, January 13). The 6 types of basic emotions and their effect on human behavior. Verywell Mind. Retrieved from https://www.verywellmind.com/an-overview-of-the-types-of-emotions-4163976

Schwartz, A. N. (2015). The loneliness of alexithymia [Dr. Schwartz’s Weblog]. Retrieved from https://www.mentalhelp.net/blogs/the-loneliness-of-alexithymia/