Howard Brain Sciences Foundation (HBSF) is interested in both the research and utilization of Artificial Intelligence (AI) to spur new advances in detection, treatment, and patient care. AI has countless potential uses as modern Artificial Neural Networks (ANN) have become increasingly complex, and thus capable of observing and processing data regarding the human brain.

Artificial Intelligence is an umbrella term for machines designed to mimic human cognitive function. Originally this mimicry was less literal, AI often being algorithm based or logic simulations. However, ANNs are designed to mimic the human brain by connecting a web of artificial neurons that can perform various hierarchical functions. Previous modes AI function largely linearly and cannot function without task-specific rules, whereas ANNs can be given abstract tasks and become optimized at said task over multiple iterations. 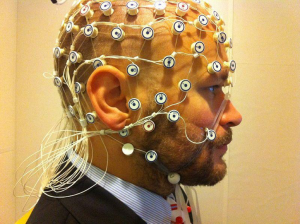 While there are a wide range of ways AI, and ANN in particular can be used there have been a number of interesting advancements in the use of ANN and Deep Learning as a means to process electroencephalographic (EEG)data. EEGs are a non-invasive means of monitoring the electrical activity in the brain. Electrodes are placed along the patient’s scalp and measure the voltage fluctuations caused by the naturally occurring electric currents within neurons. EEG data has less spatial accuracy and is predisposed to certain kinds of electrical activity when compared to functional magnetic resonance imaging (fMRI). However, EEGs can detect change over milliseconds and give care providers an instantaneous “live feed” of electrical activity while fMRIs monitor blood flow, an indirect measures of electrical activity, and while not internally invasive require patients to lay within an enclosed and often loud space.

EEGs are commonly used in the diagnosis, detection, and treatment of epilepsy. According to the World Health Organization (2019), epilepsy currently affects around 50 million people worldwide and is the most common neurological disease. However, they also estimate “70% of people living with epilepsy could live seizure- free if properly diagnosed and treated .” Like many diseases, epilepsy treatment and recovery is a matter of global economic access. Any improvements than can be made in terms of both economic and resource related cost, as well as accessibility of treatment, can therefore greatly contribute to the overall reduction of epilepsy prevalence worldwide.

For example, this past October Hisham Daoud and Magdy A. Bayoumi (2019) published their findings on the efficacy of four different ANN models in detecting seizures from EEG data. Current solutions for epileptic patients are largely based around responding once a seizure has happened or predict seizures based on indirect measures. Combining advances in ANN training regarding individualized seizure detection with the ability of HSBF’s KIWI to provide live data much like an EEG could greatly increase the prevention and treatment of epilepsy.

Daoud & Bayoumi tested four different ANNs that each process EEG data in different ways. In short, each ANN has to detect when the brain enters a preictal (pre-seizure) state, and be able to differentiate this from interictal (time between seizures in which the brain state cannot be used to predict seizures, ictal (when the brain undergoes the seizure), and postictal (the time after the seizure) state. If the ANN declares the patient as approaching a seizure in the interictal state this is a false alarm, and if the change is detected during the ictal or postictal state, it is of significantly less use to the patient.

Each of the four ANNs consist of an input layer, output layer, and a set of “hidden” layers between the input and output. In the case of this study the input is the multi-channel EEG data, and the output is categorizing if the observed patient is in a preictal or interictal state.

Deep Learning is differentiated by Machine Learning in that deep learning is non-linear and uses hierarchical trees much like the human brain. Several of Daoud & Bayoumi’s proposed models allow for hidden layers to communicate back and forth, rather than sending information along a linear and irreversible chain to output. While this requires stronger initial computing in the learning phase, this greatly expedites the time required.

Overall, Bayoumi and Daoud declared their combination of a Deep Convolutional Autoencoder, Bidirectional-Long Short Term Memory Recurrent Neural Network, and Channel Selector the most effective. This is based on the overall ANN’s sensitivity (99.72%), accuracy (99.66%), low rate of false alarms, and minimal required training time (2.2 minutes). What features define this specific approach is the ability to “recall” how the ANN has previously processed data, the use of non-linear connectivity between layers, and pre-processing the EEG data in both spatial and temporal terms.

Epilepsy is the most severe in patients at the extremes of age. For their EEG data, Bayoumi and Daoud used publically available data from a  group of 8 children that was recorded at Children’s Hospital Boston. The data ranged over the course of several days and the mean number of seizures was 5.375 with a standard deviation of 1.9. The age of participants varied, mean patient age being 10 years old with a standard deviation of 3.74 years. While this population is relatively small compared to the global prevalence of epilepsy, this is likely an artifact of the costliness of EEG data. Hypothetically, the top performing ANNs can be used on other populations in order to confirm their accuracy across a wider range of patient demographics.