Brain Machine Interfaces (BMI), also known as Brain Computer Interfaces (BCI), are an emerging technology designed to communicate with the human brain. Though there are many potential uses, these devices can be used as a type of neural prosthesis or as a way to measure electrical activity through electroencephalography (EEG).

In our previous article on EEGs this month, we defined EEGs as “a non-invasive means of monitoring the electrical activity in the brain [in which] electrodes are placed along the patient’s scalp and measure the voltage fluctuations caused by the naturally occurring electric currents within neurons.” The use of EEG technology in BMIs would allow for near real-time data on neural activity which can be utilized to a wide array of ends.

For example, at HBSF we are primarily focused on neurodegenerative diseases and are researching 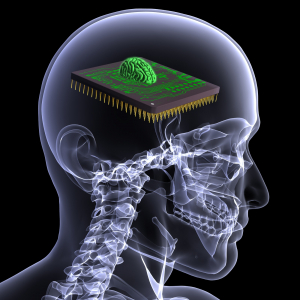 how BCIs could be used to perform targeted deep brain stimulation (DBS) for patients. DBS consists of stimulating neurons of the brain in patients, and is a leading treatment for Parkinson’s disease. When combined with artificial intelligence this would allow for increasingly optimized individual treatment solutions.

Three researchers, Yongbin Gao, Hyo Jong Lee, and Raja Majid Mehmood (2015), at Chonbuk National University have also proposed EEG readings from BCIs as a way to detect the emotional state of patients that are difficult to facially read or have difficulty expressing or self-reporting emotion. Providers who have difficulty understanding patients would be able to use BCI data as a more general guide to the patient’s emotional state, and patients looking to self-report their emotional state can respond to how their neurologically reported emotion compares to their current state. This would allow for an increase in the accessibility and efficacy of treatment, as well as prepare providers for our neurodivergent future. Gao, Lee, & Mehmood (2015), specifically cited autism and autism spectrum disorders as a potential demographic, but this development would also be useful for patients with other symptomatology such a developmental disabilities, and/or other related mental health illnesses.

Gao, Lee, and Mehmood propose a restricted Boltzmann machine (RBM) as the mode of artificial intelligence used to analyze EEG from patients. RBMs are a type of artificial neural network (ANN) that can learn to recognize distinct classifications as well as classify visual data simultaneously. As per our last article, we defined ANNs as, “designed to mimic the human brain by connecting a web of artificial neurons that can perform various hierarchical functions.” In the specific case of this study, the RBM simultaneously learned what the electrical activity of a happy, sad, calm, or scared brain reflects, while also detecting that emotion the brain’s electrical activity implied. This is due to RBM’s skill at feature extraction, the process of recognizing and processing images, as well as the inclusion of two pre-training layers that better prep the ANN to then distinguish individual patient’s unique electrical activity.

The accuracy of the RBM based ANN was  graded compared to the accuracy of two other types of algorithmic approaches. The first was a  K-Nearest Neighbor algorithm, a system in which neural activity would be categorized based on surveying similar arrangements of activity, aka the “neighbors” of the data. The second was a support-vector machine (SVM), which uses regression during training sessions to create maps to classify activity. The ANN performed better or comparably to the other AI models include, but also operates more efficiently than other models due to its faster learning and feature extraction time.

Further applications of this technology would be groundbreaking for not only patients on the autism spectrum, but for anyone using wheelchair interfaces, patients with chronic pain, as well as patients with language based difficulties when communicating with their health providers.

Gabriel Silva of University of California Sandiego (2018), suggests medical research and entertainment use will drive the future of research in BMIs. As he writes, “advances in our understanding of the relevant neurophysiology, cognitive neuroscience, mathematical and engineering aspects of signal processing, and hardware,” can significantly impact both fields, separate of which industry the research was performed in. This of course raises concerns regarding the privatization of medical research. At HBSF we encourage non-competitive collaboration between private and non-profit researchers alike in the interest of patient health. Over the course of 2018, 78% of donations at HBSF went directly back into projects. This included presenting at 4 conferences and publishing 5 papers. More about our approach to transparency can be read in our 2018 Annual Report.