This week and next week on the Brain Blog we will be presenting an overview of ALS followed by a review of cutting edge treatments and research on ALS. After exploring  ALS, the remainder of May we will be discussing mental health in honor of Mental Health Awareness month. 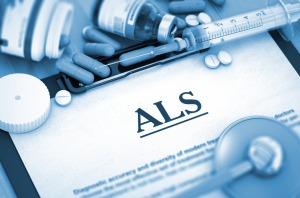 Amyotrophic lateral sclerosis (ALS) “is a neurodegenerative disease characterized by progressive muscular paralysis reflecting degeneration of motor neurons in the primary motor cortex, corticospinal tracts, brainstem, and spinal cord” (Wijesekera & Leigh, 2009). This most notably manifests in muscle stiffening, muscle twitching, and gradual atrophy, though it may also include “hyporeflexia, muscle cramps, and fasciculations” (Siddique & Siddique, 1993). It has been reported that upwards of “45% of individuals with ALS have some degree of cognitive impairment at some time during their illness” due to frontotemporal degeneration (Siddique & Siddique, 1993). Most ALS patients eventually lose the ability to breathe, walk, swallow, speak, or use their hands (Hobson & McDermott, 2016).

ALS patients often self-report symptoms, then undergo further testing with a neurologist or physician (National Institute of Neurological Disorders and Stroke, 2020). ALS testing then requires a full physical examination and several tests to rule out other possibilities (National Institute of Neurological Disorders and Stroke, 2020). The Escorial criteria (revised) and Awaji criteria are both used to diagnose ALS (Brooks, Miller, Swash, Munsat & World Federation of Neurology Research Group on Motor Neuron Diseases, 2000; Siddique & Siddique, 1993). The Awaji diagnostic criteria require evidence of lower motor neuron (LMN) degeneration by clinical, electrophysiologic, or neuropathologic examination, evidence of upper motor neuron (UMN) degeneration by clinical examination, and progressive spread of symptoms or signs within a region or to other regions, as determined by history or examination (Brooks et al., 2000). However, the following features must also be absent: electrophysiologic or pathologic evidence of other disease processes that could explain the signs of LMN and/or UMN degeneration, and neuroimaging evidence of other disease processes that could explain the observed clinical and electrophysiologic signs (Brooks et al., 2000). The Escorial criteria are then used to determine one of the following diagnoses: clinically definite ALS, clinically definite familial ALS, laboratory-supported ALS, clinically probable ALS, clinically probable, laboratory-supported ALS, clinically possible ALS, and clinically suspected ALS (Brooks et al., Siddique & Siddique, 1993). Patients may be additionally tested for frontotemporal spectrum involvement and neuropsychological complications (Siddique & Siddique, 1993).

For more information about ALS, you can read our upcoming post on the Brain Blog next week or reach out to organizations such as the ALS Therapy Development Institute, and the ALS Association.

The ALS Association. (2020). Facts You Should Know. http://www.alsa.org/about-als/facts-you-should-know.html